Gordon has been giving his support to independent Blackpool artists and the town’s growing creative arts scene this Christmas, by visiting a new pop up gallery on Talbot Road. 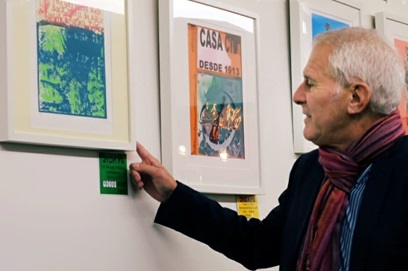 He was invited to “It’s A Gallery” by Robin Ross, who runs the “The Old Rock Factory” in the town centre. He was taken around the gallery by photographers Kate Yates and Dawn Mander and saw a range of prints, paintings, collage and other artworks being produced by locally- based artists from and around Blackpool.

The pop up gallery is open every Thursday, Friday, Saturday and Sunday, up till and including 23rd December. Gordon described the gallery as a “celebration” of Blackpool’s growing and “diverse” independent art scene.

He said: “It was a great treat to see so much diverse, striking and innovative work on show, and reflecting the creative talent in and around the Blackpool area. There were some particularly powerful and unusual depictions of the townscape, coast and the people who make Blackpool such an exciting place for artists and creative people to work on. Whether self-taught or coming up through printmaking, photography and increasingly digital image making backgrounds, it represents a burgeoning of talent that is starting to echo some of the vibrant creative scene in Manchester and Liverpool. It also can contribute to the more diverse locally based economy and small business start-ups encouraged by the Council’s ‘Get Started’ initiatives that I’ve strongly supported.

“Set alongside the new works currently on show at Shaw’s Cafe Bar on Clifton Street by Robin Ross, who as both artist and creative promoter has done much across Blackpool, not least through the Sand, Sea and Spray festivals across the town in recent years, it represents a great display of creative talent and original work – much of it very competitively priced , not least as potential unique gifts over the Christmas period..
‘Robin himself I have known for a number of years -there is no one more passionate about Blackpool and discovering emerging local artistic talent.’

Robin, who’s been recently promoting his work in Moscow, said: “I want to thank Gordon for showing his support. This is about local businesses and independent artists working together to create a better Blackpool for both residents and the many visitors we have each year. The independent art scene is alive and well across the town.”